A CONFEDERACY OF THE MIND

Under the Rebel Flag in Columbia, South Carolina

The Confederate flag still waved high beside the State House in Columbia, South Carolina, next to a statue of a rebel fallen to the Lost Cause.

That flag marked the epicenter of the capital city.  I remembered the national controversy, in 2000, when, after a damaging boycott of South Carolina sponsored by the NAACP, the rebel flag was removed from the top of the State House dome to this place on the grounds. Even this small compromise, moving the flag a few hundred yards, was hard-fought.  The conflict continued into the 2010’s without resolution.  It underscored the passion of some white South Carolinians for their slaveholding heritage.  State Representative Leon Howard believed the taxpayers deserved better than more of South Carolina’s “confederacy of the mind.”

The state’s Conservative Action Council still wanted to restore the flag to the top of the dome, staging protests in full Confederate regalia.  Their chairman asserted that the flag’s removal was “ethnic cleansing” for European-Americans and claimed that whites no longer had a place in a multicultural society.  His secretary added that the rebel flag “stands for the Confederate troops who sacrificed so much and in many cases paid the ultimate price for the freedoms we know today.” 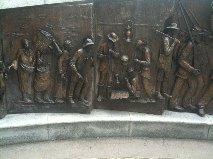 Amid the State House’s subtropical gardens, a 2001 memorial by a Denver sculptor paid homage to African-American contributions. I could see in Ed Dwight’s bronze frieze those who really paid the price for the freedoms we know today.  I couldn’t think of a single freedom—or a single advance or achievement—we gained from the Confederacy’s secession. Dwight’s frieze choked me up with its upright truths. In a wide V, the figures spanned the centuries: from transports of bound slaves, to nineteenth century freedom fighters, contemporary judges, athletes, astronauts (of which Dwight himself was the among the first), and, as George said, “just plain ol’ people at work, the ones we sometimes forget to commemorate.” Beside the bronze panels, Dwight’s memorial included a map in black marble depicting the Atlantic slave trade, a gathering of lines linking West African nations to a tight web of netting, cinched at Charleston harbor. I was glad South Carolina had the guts to present this ugly aspect of its true history, even if it was tucked beside the State House. But why wasn’t this the memorial occupying Columbia’s busiest intersection, beside the Confederate battle flag?

The Civil War brought the near-total destruction of antebellum Columbia.  In February 1865, General Sherman’s scorched-earth march took a left turn after Savannah and cut a diagonal back inland to destroy the capital of the state where the Confederacy was born.  A widespread fire, its causes still controversial (of course), preceded Sherman’s approach.  A Union division advanced ahead of the incendiary General and either started or fought the ensuing conflagration of Columbia.  When Confederate forces retreated, they reputedly set cotton bales alight, adding to the flames.  Sherman finished the job the day after the great fire, destroying every remaining vestige of the city’s transportation infrastructure and industries.

The city never fully recovered.  Unlike Macon, Savannah, and Charleston, with their extensive historic zones, Columbia had only a patchwork of remnants. Maybe  Columbia needed progressive goals, not another debate on flying the rebel flag. 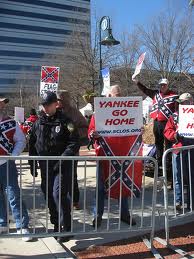 Before we left Columbia, George needed to visit the State Archives.  He wanted to search upstate South Carolina for traces of his great-grandmother, (All George knew was that she may have been a pioneering female African-American preacher and did not even have her first name.) We hoped that this state agency, charged with preserving records of all kinds, might have the genealogical key.  But first we had to find the facility, leaving Columbia to meander into the forested hills north of the city where we circled a gleaming, curvaceous complex in wonderment.  “This can’t be it,” we both blurted, astonished at the scale of the place, the sterile plaza, the sea-green wall of windows, the long setback arrayed with concrete, barrel-style barriers.

Inside, the state archives offices welcomed us immediately. The state archivist explained the course of other such obscure ancestor searches.  “It’s so hard when there are no clear paper records,” he said, “because birth certificates were rare before the early 20th Century.  But it’s not impossible.”   Around us, other visitors, often elder and middle-aged family pairings, worked away diligently at genealogical records.  Our archivist hit upon a new, last angle, telling George to try church records around Greenville, where family lore believed his great-grandmother had settled.

Leaving the records offices, we admired the archivists’ professionalism, the time and effort taken with outsiders, no questions asked, the very model of a first-rate, egalitarian government service.  The scale of the place puzzled us, this magnificent, modern, self-contained palace of records, expensive for any low-tax state on Great Recession starvation budgets. Then, crossing the enormous, bomb-proofed plaza, all so far from the central city, it hit me. I recalled the tales of chaotic property claims in the post Civil War Low Country, how legal documents had been shipped to secure, inland, soon-to-be-burned Columbia for safekeeping.  Given the state had been threatened with outright destruction in the Civil War, it was no wonder South Carolina had housed its records in this  tucked-away, terror-proofed facility.

The air was heavy and faintly smoky over the capital, just over the wooded horizon. The afternoon’s foggy drizzle evaporated into red-filtered haze.  I realized that without planning to, George and I had followed Sherman as if on a march ourselves, from the outskirts of Atlanta down through his fake-out in Macon to his real target in Savannah.  Now, we’d ended up tracing Sherman’s cinder trail to his final bonfire here in Columbia.  Imagine the ashes, I thought, on the day Sherman’s men torched the city, and/or Confederate soldiers lit cotton bales to deny him the spoils of war.

A citizen fleeing Columbia’s destruction would’ve tasted ashes even on this distant hilltop, ashes still sifting over all that we have won and lost. 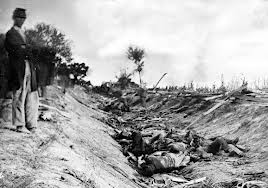 3 responses to “A CONFEDERACY OF THE MIND”