“It’s Okay to Be Rude to Terrorists”: Righting Wrongs in the Ozarks

Maybe they’d been armed for bear, too, with snooping Northerners requesting this very meeting—only to bring more torment for their town?  But their good humor, the warmth of their welcome and the sincerity of their tone made us all relax.

There might be grim comedy to this, the best hearts and minds in the all-white town trying desperately to reconnect to African Americans and getting nowhere because… well, whites had expelled the blacks over a hundred years before.  But it wasn’t funny.  Later I read some of the postings on articles about the billboard and felt what the task force was up against.  In anonymous comments, citizens sparred with citizens over references to white power.  Many posts showed deep confusion about white privilege in our country, an unexamined feeling of betrayal, and that whites were superior, yet under attack:

“If white people had a country of our own, none of this would be happening.

Racist white people lost the Civil War. Get over and stop being a whining b*tch!

Racist? You just call them that because they are white, that makes you anti-white. The greatest racists of our time is in power now, and they intend to use their power to make sure the are no white children in the future.” 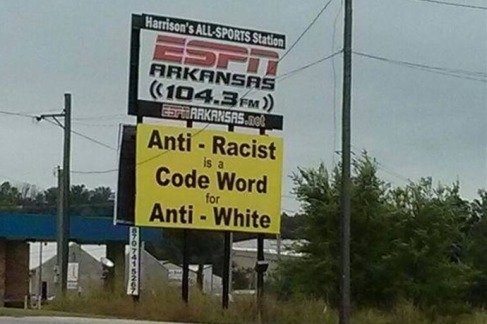 On our visit, Harrison’s notorious new billboard was just another giant anonymous posting shouting over the town, the exact author or group sponsor unknown.  Ironically, the task force measured its success in the wider community’s reaction to the billboard’s message. Phones lit up from random citizens demanding, “What are we going to do about it?” and in came donations from random folks, with letters objecting to the new billboard. Layne took that as validation of the task force’s place in the town’s consciousness as the go-to people to combat outbreaks of racism that shamed the community, insisting, “that’s the real story of Harrison.” 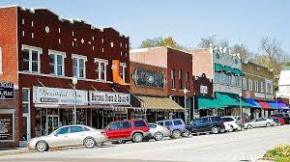 Of course, many people in Harrison suspected the Klan was behind the billboard. Nate explained that stirring up conflict was “the mating call of white supremacists” and wondered if global white power fanatics might be behind it, hiding racism behind accepted values. Such was the racists’ success at rebranding that a local Latina picked up a Klan flyer at a local event just to be polite.

All four task force members sighed in mutual exasperation.  “We had to tell her,” Layne said, “that’s it’s okay to be rude to terrorists.”

Their candor pushed the meeting beyond small-town boosterism.  I swear, it was something almost spiritual, which is hard for a non-spiritual, non-religious guy like me to admit. (In fact, for Patty, who was also the Chamber president, racial reconciliation was “almost a calling.”) To me, long-fallen Catholic, their work on the task force to improve racial relations had led them to embrace concepts similar to (gulp) Christian redemption.  Not your usual Chamber of Commerce project.

It had been a long project, too, going back ten years, and without advisors or mentors.  The task force found its way alone in the dark to overcome Harrison’s reputation.  Their approach, after some stumbles, was simply to seek, then share, the light.  “It’s just us, trying things out, nothing more,” explained Carolyn, who touched me with her quiet pride in the themes they’d gathered and settled on through the years—“Prepare our Community, Proceed with Civility and Respect, Reach Out in Reconciliation.”

George, ever the community activist, gently challenged the group to explain exactly they’d done to Reach Out.  A lot, it turned out—prodding the community to celebrate MLK day, inviting speakers, encouraging links between Harrison students and diverse counterparts out there in the “real world.” But even Love Your Neighbor activities and peace forums didn’t guarantee success.  They couldn’t engage the Southern Poverty Law Center, and a brainstorm about connecting black pastors hit a wall because Harrison had no black pastors. “I don’t know what do then,” Carolyn said of her failed outreach, repeating, “It’s just us, trying things out, nothing more.”

After our conversation and a whirlwind tour of Harrison’s town center, George and I found the scenic route to Little Rock, our next stop.  Arkansas Highway 7 lived up to its promise as one of the most mind-blowing drives in the state, “if not the world.”  As we crested over Ozark ridges exploding into autumn, I felt again the South’s seductive pull.  It wasn’t just the scenery, though, but these encounters with Southerners doing their best to make the world a better place.  They confronted the wrongs of their history, I thought, with more honesty and positive action than most Northerners.

It would be easy for any writer to play up stereotypes, whether those mired in Southern racism and its real hardships, or those of Southern hospitality and gracious living. That’s all just red meat to throw at Northerners, reassuring us in our smugness that the South is “special,” and “different,” like some brain-damaged stepchild.  Even in these blogs I go for the catchy titles and clichéd lures about grits and the Klan. But everywhere in the real South there were people who really were special, moving forward, brave and persistent enough “to try things out, nothing more.”

Nothing more than the best we all can do.

2 responses to ““It’s Okay to Be Rude to Terrorists”: Righting Wrongs in the Ozarks”