A Psychotic Sleeping Beauty: On the Road to Greenwood, Mississippi

Plus, What Billy Joe McAllister Really Did Throw Off the Tallahatchie Bridge

The Mississippi countryside north of Vicksburg looked exactly like it was supposed to—“a sleeping beauty,” I told George.

“I hope she doesn’t wake up,” he said, grumpy and travel weary as we crossed north into the Delta.  Considering that George vowed he would “never set foot in Mississippi” before this trip, I was lucky to have him along.  George’s father “mysteriously estranged” himself from his early roots in the state, and the way his son had talked, traveling to Mississippi would be as crazy as booking a journey to Hell.

Yet here we were, as deep as we could get into the state famous for its poverty and Jim Crow violence, following the Yazoo River along state route 3.  As the late October afternoon grew darker, part of me freaked over what would happen if this sleeping beauty did wake up again, psychotic as she was in the 60s, when white-supremacist terrorism bloomed like cotton fields.  But most fields were fallow now as the route went between quiet expanses of still-green pasture and tunnel-like tree groves, branches arching over the highway.  Not a soul stirred around the modest farmhouses. Even the few dinky towns hid themselves, miles off the main road, down even quieter roads.

As we hopscotched country routes toward Greenwood, the heart of the old Delta economy (once the World’s Largest Inland Long Staple Cotton Market, don’t ya know?), where the Tallahatchie River emptied into the Yazoo. George, still grumpy, asked, “Why on earth we were going to Greenwood?”

“To discover once and for all why Billy Joe McAlister jumped off the Tallahatchie Bridge,” I joked feebly, but it worked.  George, ever the chorister, started singing the great old Bobby Gentry song about a mysterious motive that drove Billy Joe to suicide.  Soon, I would solve the mystery: Billy Joe McAllister jumped off that damn bridge because Greenwood drove him nuts, suspended too long between hope and despair.

I had lots of reasons to visit the town, which was an epicenter of civil rights history.  The powerful segregationist White Citizens Council was formed in Greenwood in 1954.  As with Selma, when local blacks were attacked for registering to vote in the early 60s, prominent figures such as James Meredith and Stokely Carmichael came to town to highlight the struggle, birthing the Greenwood Movement, and celebrities such as Dick Gregory and Harry Belafonte raised funds from afar. The very idea of Black Power was launched in a small Greenwood park.

But as night fell and we entered Greenwood, I wondered how solid my reasons were. Today it was probably another sleepy, dusty Delta town, maybe even a ghost of one.  Our first impression was depressing.  The main drag led through a block after block of empty, soaped-over storefronts–a dead zone. I had a horrible feeling that after the Movement’s successful store boycotts to gain voting rights, Greenwood had devolved into a place where no one shopped at all. 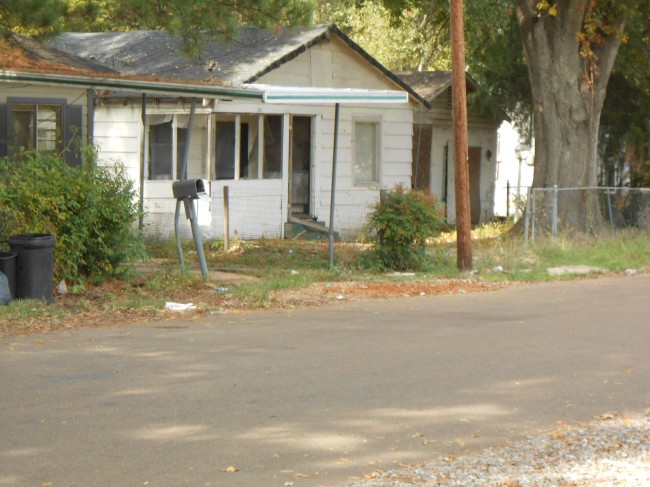 George was uneasy about hanging out in the town center after dark, so we walked across the Yazoo River and down Grand Boulevard.  Though renowned for the grandeur of older and newer homes, some occupying entire blocks, used as a movie set in “The Help,” and now lavishly decorated for Halloween, Grand Boulevard was as lifeless as downtown.  Crossing the river again, we did find a BBQ joint open near the courthouse.  When we asked what else was available downtown, a bewildered young waitress stared as us blankly.

We got the message, but before we fled the abandoned streets, I wanted to ponder the inevitable Confederate statue at the courthouse.  In 1962, when student Sam Block attempted to help register black voters here, the Citizens Council called to kindly inform him to stop or he would “never leave Greenwood alive.”  This is before he was “beaten, shot at driven from SNCC headquarters by goons with chains and shotguns, and firebombed.” George told me the hell with the statue, we had to get going. 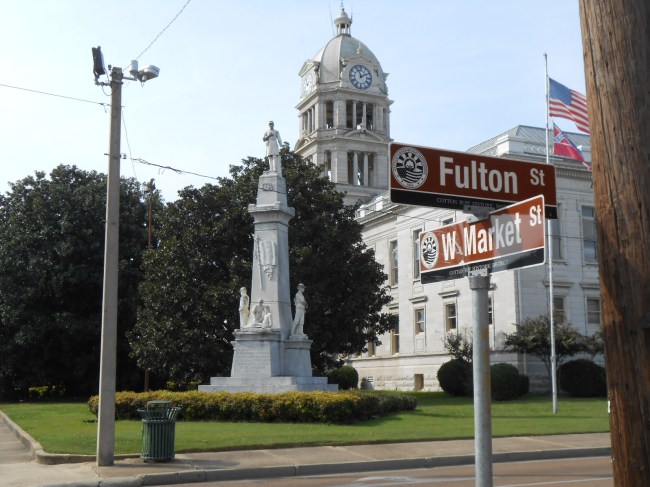