BLOWN AWAY IN BOMBINGHAM:

Birmingham Overcomes the Terror of its Recent Past

Having grown up watching re-run news clips of Birmingham police slamming children into walls with high-pressure hoses, Kristen and I weren’t exactly well disposed to appreciate Alabama’s largest city. Apart from its 1960’s violence against human rights, Birmingham has suffered from a weak image throughout the nation, hardly charismatic like New Orleans or dynamic like Atlanta. On our drive across north central Alabama, again following the route of the Freedom Riders fifty-plus years later, I expected Birmingham to be a bigger Anniston, hollowed-out and dispirited by a tragic place in civil rights history. 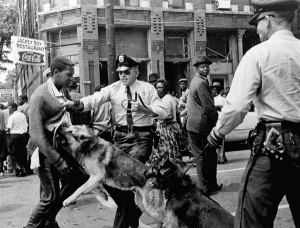 I hardly expected we would gush over central Birmingham’s vibrant downtown or its careful, educational curating of its recent history. The city is actually the Anti-Anniston—a growing, confident city, not only respectful of its tragic past but showcasing it to educate all of us. 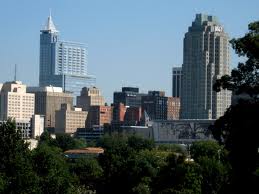 It was easy to explore Birmingham’s self-guided pathways along the Civil Rights Trail, clearly marked and linked along the west side of downtown. Kristen and I learned about the city’s bat-shit crazy forms of apartheid; one segregation- era “law” forbade whites and blacks playing checkers or dice together.  Crossing Kelly Ingram Park, without clear plans, Kristen and I found ourselves swept—literally, by a church worker wielding a broom on the sidewalk–into the Sixteenth Street Baptist Church, where four girls were killed by white supremacist terror bombers in 1963. As we studied a gallery of commemorative photos near the church entry, a volunteer appeared at our side, spontaneously taking us on a tour of the church. With the site’s tragedy heavy in the atmosphere, I felt, as a devout nonbeliever, that I was being transported through a sacred space.

Soon our volunteer guide, Isaiah Perry, expanded the talk of church facts with mention of the bombing. Then he gave us the whole history. Isaiah was amiable, yet so serious, pausing to think before he gave such considered, careful, honest answers. We asked about everything—he always responded, unabashed, open. He had witnessed and participated in the ‘63 movement, the children’s rebellion, defying his school principal (who was under the gun himself from white supremacists) to join the marches. Isaiah himself was not injured, but he witnessed the infamous hosings and dog attacks on 6th St. He saw Birmingham’s violently segregationist Commissioner Bull Connor going by in his giant water-gun tanker.

Isaiah escorted us to the northeast corner of the church, where the bomb was set off, taking out a huge chunk of the wall, including two windows and gouging the face of Jesus out of a central stained-glass depiction. He briefly guided us outside again to see where the detonation demolished the basement; then the very spot inside where the girls were killed while chatting in the ladies room.   Later Isaiah showed us the clock that stopped when the electricity was cut at 10:22, a frozen moment when four American girls, full of promise and looking ahead to the joys of their young womanhood, were murdered in the safest place in their world, their own church.

Studying the church gallery’s pictures of the pandemonium following the bombing–a woman being dragged away, police detaining clergymen, Rev. Fred Shuttleworth’s boys under threat at their school–I naively asked Isaiah about this maddening mystery: how could those men, all thought by their mothers to respect women and children, do such things without unmanning themselves to themselves?  Isaiah answered without hesitation that when it was the norm among peers to act that way, “those rules, those courtesies were blasted away by groupthink.” And blacks, he emphasized, were not included in the taboo against such violence.

Kristen’s words from her chapter “Ghost Moon Over Alabama” capture the political and social forces in Birmingham that clarify the audacity of Alabama’s 1960s terrorism. She begins, ironically, with the very nonviolent philosophy that had trained Isaiah and the other children in the crusade:

One marker [on Birmingham’s Civil Rights Trail] includes parts of Martin Luther King’s nonviolent strategy for the Birmingham protesters. Protestors needed to refrain from violence of the fist, tongue, and heart.

As the weeks wore on, adults couldn’t keep missing work in order to protest, be jailed, and then skip work to protest and be jailed again. Children stepped in. On the first day of Birmingham’s Children’s Crusade nearly a thousand children, ages six to eighteen were arrested. Scenes of police brutality against adults had distressed American television viewers. Now they witnessed children attacked by dogs and plastered against brick walls by the bruising force of water cannons. 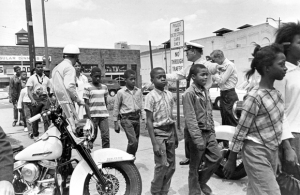 There were no black police, bus drivers, or firefighters in Birmingham then, and it was illegal for a black secretary to work for whites. Birmingham’s notorious Commissioner of Public Safety Bull Connor (in charge of schools, the police, the fire department, public health, and libraries) closed the city’s sixty parks rather than obey court-ordered desegregation.

The people of Birmingham had given Connor a landslide win just two weeks before the Freedom Riders limped into Birmingham on that Mothers Day in 1961, aboard the other bus, the one that hadn’t been burned in Anniston. Connor knew they were coming; he in turn alerted the KKK with a promise that there would be no police presence. His officers would be visiting their mothers. The already injured Freedom Riders, also terrorized the entire way from Anniston, were again savagely beaten, this time at the Birmingham station.

Civil Rights leaders took note. They decided that if they could defeat segregation in “Bombingham,” the most segregated city in the country, it could be defeated anywhere. People would picket and march on the streets; they would participate in sit-ins (sitting down in segregated stores and restaurants) and they would boycott segregated establishments.

Project C (for confrontation) began in April 1963, with twenty-four college students sitting-in at four downtown lunch counters, including Woolworths. The stores responded by closing their doors. Black preachers throughout the city wore blue jeans to church, a serious breach of etiquette in the formal black churches of the day. Pastors told their congregations to skip buying new clothes for Easter. The boycott was on, as were the marches.

Connor’s force arrested hundreds of marchers. They arrested Martin Luther King on April 16; that gave him the opportunity to write his famous Letter from Birmingham Jail in the margins of newspapers, the only paper he was allowed. “Injustice anywhere is a threat to justice everywhere,” is one of the famous lines from that letter. “We are caught in an inescapable network of mutuality, tied in a single garment of destiny. Whatever affects one directly, affects all indirectly…”

Connor labeled King and the rest of the Civil Rights leaders communists and ordered his men to handle the protesters with violence that ended up on the nightly news across America and around the world.

That was the backdrop when a terrorist bomb killed four schoolgirls on Sunday morning, September 15, 1963, at the Sixteenth Street Baptist Church, Birmingham’s most famous church. It might have been a scene from the Middle East violence: twenty other congregation members were injured. Later that same day, a white Birmingham mob murdered a black teen. The investigation into the bombing closed inconclusively in 1968 only to reopen three years later when it was discovered that FBI director Edgar J. Hoover had ordered that evidence incriminating four Klansmen be kept secret from the prosecutors. It wasn’t until 1977, 2001, and 2002 that the three surviving bombers were finally convicted and sentenced to spend their old age in prison.

In his eulogy to the four girls killed here, Martin Luther King Jr. told mourners that God can wring good out of evil and that history has proven that unmerited suffering is redemptive. “This tragic event may cause the white South to come to terms with its conscience,” he said.

As Kristen and I explored central Birmingham, it became obvious that it has redeemed itself as a vibrant, forward-looking city, definitely with an African-American face, but also relaxed and welcoming to all. Again, in Kristen’s words, our first impressions of today’s Birmingham:

If Anniston felt like its moment has passed, Birmingham seemed poised on the threshold of greatness. Our first visit there was like getting to Oz after being lost for a good long while, far from any yellow-brick road. Downtown Birmingham sparkled despite a lack of rain over the past weeks.

We drove into Birmingham’s university district on a gusty autumn morning, the wind scattering sunlight. I felt as though we’d discovered an obscure jewel of a city that the rest of the country had forgotten, or perhaps written off. My searches for Birmingham online included a racist website using the city as a cautionary tale of what happens to majority-African-American cities.

After our visit I thought, if this is what happens, bring it on. Birmingham boasted flower boxes, tidy streets, and corners and sidewalks so wide and rounded that they felt more akin to a plaza in Paris than an American urban intersection. Art deco towers rose above green parks. They weren’t the outsized glass and steel skyscrapers of Denver or Atlanta, but something more human sized, ten or twenty stories, some of them roofed with terra cotta tile, some fret-worked as intricately as a baroque Italian church.

We breakfasted in a café that looked out a walkable, bike-able cityscape. Dozens of people were out and about, even on a cold, gusty morning. I realized how empty Anniston’s sidewalks had been. People there needed to drive to ever more distant stores. Anniston had been a ghost town whereas Birmingham was full of people, even human works of art, like the man wearing tight, purple short-shorts and high boots despite the chill. I was back in my comfort zone. Our waitress was dismissive, proof that we were nestled back in modern, urban America. It was great. …

“Yes, the crime rate was as high as Orlando, Florida, tied for third highest in the nation. But it was worldly enough to have a great Korean restaurant filled with Korean businessmen laughing over jokes in Korean. Magazines regularly rated Birmingham as one of the best metro areas to live in, with good salaries and low living expenses. It had a biotechnology and medical research center—the reason for all the purposeful walkabouts we saw on the university district’s streets. The university, with its huge hospital, was the biggest employer in Birmingham, and the second largest employer in the state. The city also was a banking hub, and it still had steel, the industry that built the city.

It was a smaller steel industry, to be sure, than in Birmingham’s heyday, but they were paying their workers this time.

Kristen’s understated reference here is to the decades of peonage and forced labor, the use of the legal system to re-enslave black workers after Reconstruction that manned Birmingham’s industry after the civil war, that evil phenomenon detailed in Douglas Blackmon’s Slavery by Another Name. Even as we exited the city via 4th Avenue, its historic structures quickly revitalizing, an emblem of all the optimism of a city that has overcome its tortured past and flourished now as an African-American metropolis, I couldn’t shake away that shadowy feeling of wrongs still buried and unresolved. I felt so privileged to have met Isaiah, so moved to have stood the sacred ground in his excellent company of a witness to 1963’s terror. But the terrorists never really saw justice, or faced charges in a system dragging out its justice for over forty years. Obscene.

If we felt we’d found redemption alive  in modern Birmingham, we would soon find the Anti-Birmingham: Selma, a town whose very name has become synonymous with Alabama’s violent segregation era.